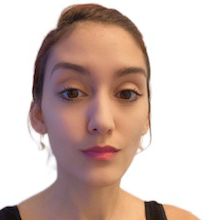 Marcela received her BF in Dance Pedagogy from the Ministry of Education of Paraguay as well as studied with the Paraguay Folklore and Escuela Bolera in flamenco. She is certified Pilate’s instructor. She loves to teach and to share her knowledge and passion for dance. Marcela is the proud mother of her baby girl Alba Lucia Palau.