Photo of Ayano Kimura and Masanori Takiguchi by xmbphotography.

Choreography: George Balanchine © The George Balanchine Trust
Music: Concerto in D minor for Two Violins, B.W.V.
Composer: Johann Sebastian Bach
Read More
Balanchine said of this work: “If the dance designer sees in the development of classical dancing a counterpart in the development of music and has studied them both, he will derive continual inspiration from great scores.” In the first movement of the concerto, the two ballerinas personify the violins, while a corps of eight women accompany them. In the second movement, a largo, the male dancer joins the leading woman in a pas de deux. In the concluding allegro section, the entire ensemble expresses the syncopation and rhythmic vitality of Bach’s music.
​
This work began as an exercise by Balanchine for the School of American Ballet and was performed by American Ballet Caravan on its historic tour of South America.  Later it entered the repertory of the Ballet Russe de Monte Carlo. In 1951, Balanchine permanently eliminated the original costumes and dressed the dancers in practice clothes, probably the first appearance of what has come to be regarded as a signature Balanchine costume for contemporary works. On October 11, 1948, Concerto Barocco was one of three ballets on the program at New York City Ballet’s first performance.
© 1987-2020 by The George Balanchine Trust

Choreography: George Balanchine © The George Balanchine Trust
Music: Excerpt from Swan Lake, Op. 20, Act III
Composer: Peter Ilyitch Tschaikovsky
Read More
An eight-minute display of ballet bravura and technique, Tschaikovsky Pas de Deux uses music that the composer belatedly created for Act III of Swan Lake. It was hurriedly composed for Anna Sobeshchanskaya, a Bolshoi prima ballerina who was scheduled to make her debut in the title role at the fourth performance of the 1877 Moscow production, and sought to enrich the part of Odile.
​
Because the music was not in the original score, it was not published with the rest of Swan Lake, and disappeared for more than half a century. When it was discovered in the Bolshoi Theater archives in 1953, Balanchine sought — and was granted — permission to use it for his own choreography.
© 1987-2020 by The George Balanchine Trust

Balanchine regarded Apollo as his artistic coming of age. He said that through the creation of this work, he learned he could “dare not use all my ideas, that I too, could eliminate. . . to the one possibility that is inevitable.” The ballet depicts Apollo, the young god of music, who is visited and instructed by three Muses, who were also children of Zeus and thus his half-sisters: Calliope, Muse of poetry, whose symbol is a tablet; Polyhymnia, Muse of mime, whose symbol is a mask that represents the power of gesture; and Terpsichore, Muse of dance and song, whose symbol is a lyre. Stravinsky, who possessed a strong interest in Greek mythology, conceived of and composed the score as a ballet. It was with this work, his second ballet set to the music of Stravinsky, that Balanchine, at age 24, achieved international recognition and began his lifelong partnership with the composer.

An intensive development of the classic ballet lexicon, Theme and Variations was intended, as Balanchine wrote: “to evoke that great period in classical dancing when Russian ballet flourished with the aid of Tschaikovsky’s music.” The final movement of the composer’s third orchestral suite consists of 12 variations. The ballet opens to reveal a corps of twelve women and a principal couple. As the ballet moves from variation to variation, the solo performances of the ballerina and her cavalier are interspersed among the corps performances. As in all classical ballets, there is a central pas de deux. A grand polonaise builds to the climactic finale for the entire cast of 26 dancers.

The John F. Kennedy Center for the Performing Arts 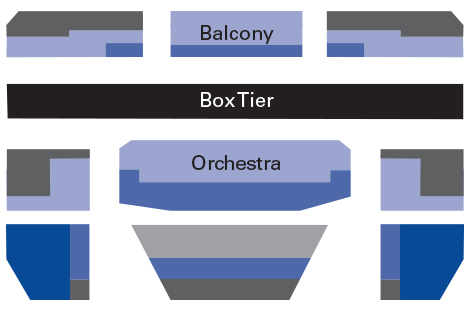 The Eisenhower Theater in the majestic John F. Kennedy Center for the Performing Arts. The theater seats 1,164 people and contains an orchestra pit for 35 musicians.