Corey Landolt is in his 13th season with The Washington Ballet Company after dancing for three seasons with TWB’s Studio Company. His adorable dogs, Elliott and Benjamin, are regulars at the TWB studios!

“If you know me, you know I not-so-low-key love dogs. Especially my dogs: Elliott, a 10-year-old Shar Pei/Lab mix, and Benjamin, the 11-month-old Shar Pei puppy. 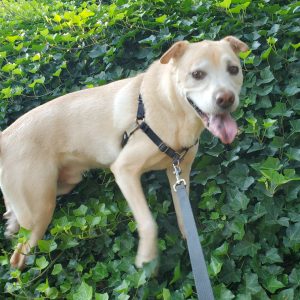 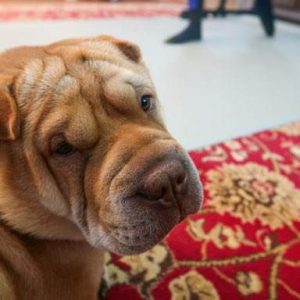 Throughout my years at The Washington Ballet, they’ve accompanied me to classes and rehearsals and hopefully will continue to do so post-pandemic. My favorite memories of bringing Elliott to rehearsals years ago are of him nestled under the piano or sitting next to our ballet master, Elaine Kudo.

If he wasn’t receiving what he considered to be adequate attention, he would start to gently whine and whimper until either myself or another dancer came to give him pats on the head and some loving.

Benjamin has had considerably less time at the ballet studios (because the pandemic started when he was six-months-old) however in his brief three months in-studio he quickly became a favorite to everyone in the building. He learned how to be exceptionally patient and well-behaved during rehearsals, in exchange for me spending my entire five-minute break allowing him to climb all over me. 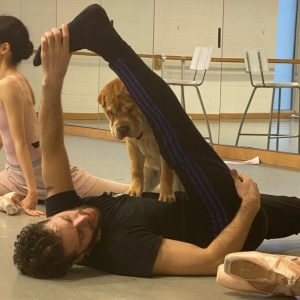 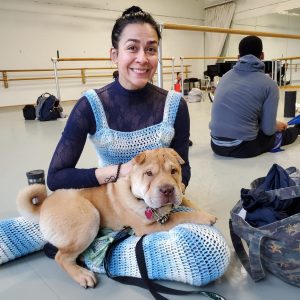 Time out of the studio and taking class at home has presented its own set of challenges. In addition to the standard array of spacing and technical challenges that come with home class, I also have two wandering 50lb balls of curious fluff to contend with.

Benjamin’s newly cultivated skill is walking right in front of the camera while I’m attempting to learn the combination or ending up underfoot and getting a bit too close during rond de jambes or grand battements. Elliott has been sticking to his old standby of whining and staring me intensely in the eye if I’m not paying attention to him, IE doing my job. 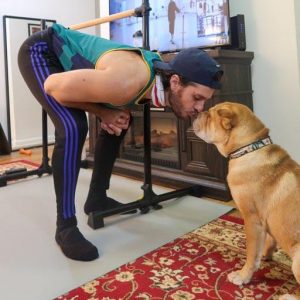 Class at home with Benjamin.

As much as I miss time in the studio it’s clear that Elliott and Benjamin are missing it too. With any luck, we’ll be back in the studios soon, pups and all.”